I first came to Italy forty-five years ago.  Today, May 7, 2017, I find myself in Italy once again, with a friend, about to embark on a writing fellowship.  Our destination is Borseda, a small village in the mountains of Liguria, the last village on the road that leads to the Calice Valley.  On Monday afternoon after a train trip from Florence, we climb aboard our rented Fiat Cubo and head from La Spezia towards Borseda, a distance of only 19.1 miles.  The road soon becomes narrow, full of hairpin curves with more than a few pot holes. After about two hours of driving and dealing with more than one wrong turn, we arrive in Borseda, supposedly just 50 minutes Google informs us from our departure from La Spezia. 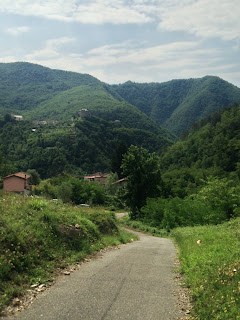 Although Borseda is small, it is divided into two parts:  Upper and Lower Borseda.  Our home for three weeks will be in Lower Borseda in a house built in 1865.  A few years ago, the family, who owned it for 150 years, decided to sell half of their home to the Rensing Center, a non-profit that aids various visual and literary artists.
We climb the steep stairs and enter the apartment with all our worldly possessions, including many of our groceries for the next three weeks.  Our place has a small but well-equipped kitchen, a recently renovated bathroom with a powerful shower, a living room with a free standing, wood burning stove, and a small bedroom with an old, wrought iron bedframe that seems ideal for a princess.  When we arrive, everything seems to function well.  But after a few minutes, I realize that I am not able to light the gas burners of the stove.  We later find out that this is due to a block in the gas cylinder located in the cantina below our building.  The wood burning stove does not function well either, but this is due to the extreme humidity. In fact, we can’t get a piece of newspaper to stay lit, because of the humidity.  Everything at first seems strange, but interesting. 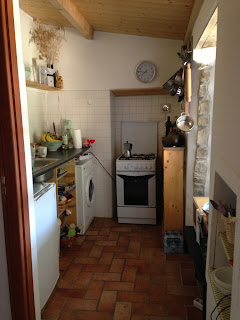 After three weeks in Borseda we have met five people who actually live here.  Many villagers left during the last two centuries in order to make a living.  The migratory phenomenon was so extreme that there is a large sign in Veppo, the closest village to Borseda that commemorates the exodus and explains that emigration offered the former villagers a better life.  Initially, the emigrants used old mule tracks to escape.  On this rather large sign in Veppo we read that emigration afforded the former villagers both work and a better income during the Napoleonic times.  Later emigrants also went to Switzerland, France, Argentina, and the United States.  Now many homes in many of these villages have been shuttered and abandoned.  Outside many homes there are “for sale” signs. 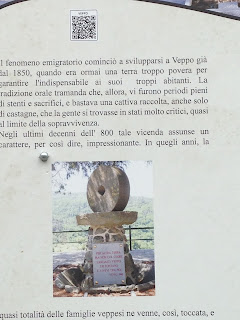 One would need an entire lifetime to know all the small villages of this mountainous part of Liguria.  It seems that after every curve on every small road there is another small village.  We feel fortunate to have an apartment in such a beautiful village, with a rental car which we can use to do our shopping, or to take a weekend trip.
After just four days in Borseda, when we are just beginning to know this part of the world, we decide to leave Borseda for three days to visit Camogli, Genova, and San Remo and a few small mountain villages including Baiardo, Dolceacqua, Isolabona, and Busana Vecchia located to the north and west.  It is great to get away for a few days, to see an art exhibition of Amadeo Modigliani’s paintings in Genova, and to visit the town of Camogli while it actively prepares for its annual fish festival, Friol, which will happen in just two days.
We take a room in a small hotel that looks out onto the harbor of Camogli.  The hotel is called I Tre Merli, or Three Blackbirds.   I drive our rental car right down to the entrance of the harbor where the hotel is located, a totally illegal move as I find out later, because the harbor city has to set up this area for the annual fish fry.
We return to Borseda after our three-day holiday, and it seems like we are returning home, to the hearth.  We talk to our new friends in Borseda about our trip to San Remo, yet we don’t tell them that we travelled to Menton, France, by mistake, while trying to find the Handbury Garden located near Ventimiglia, Italy.

Now Borseda seems like home.  The people of nearby Veppo and Villagrossa are our friends and neighbors.  Now we have something to talk about with them.  We think that we have something more interesting to communicate after visiting another part of Liguria.
After a few days, some friends from England pay us a visit in Borseda.  Everything is a bit crazy because now there are six adults who all have competing desires.  Five of us take a walk from Borseda to Villagrossa.  We follow a well-trodden path that goes down and then up the Vara valley.  The walk is arduous.  We see goats, bee hives, alpaca, and a lovely picnic site.  There are lots of abandoned houses and a few homes where we can tell that someone actually lives.  We spot the alpaca in the distance. They seem out of place, truly surreal.

At the end of our three weeks in Borseda we take another car trip from Borseda, this time to the airport in Bologna to pick up my husband.  I have an hour free before we are due to leave, so I decide to take a walk to burn off some excess energy.  I know that there is a path that goes from Lower Borseda to Upper Borseda but I quickly lose my way once I reach Upper Borseda and take another path out of the “upper” village.  The path becomes slippery in parts and seems to disappear for a while.  I’m lost. I find myself jumping over a barbed wire fence two times in order to stay on what seems to be a path.
I think of Dante, and I am convinced that he, too, had this concrete experience of being lost in a “dark wood.”  There is a reason that the Divine Comedy is known as an allegory.  There are several levels to his story and one of them is of an actual man who is lost in the selva scura and who does not know which way to go.  After two hours, I remerge but unlike Dante, I do not see “stars” but the same path that I had taken at the beginning of my walk.
Due to my unplanned journey, instead of arriving at the Bologna airport about a half hour early, we arrive after my husband has landed and emerged from customs.  We then drive to Parma where we have lunch with some close friends, who have prepared a feast with several appetizers including prosciutto di Parma, an exquisite piece of aged Parmesan cheese, tortelli filled with wild greens, tortelli filled with pumpkin, an octopus salad, strawberries with a selection of various flavors of artisanal ice-cream and lots of champagne.


We take a tour of the central city of Parma and see the duomo, the baptistery, the Reggio Theatre, the central square with its unusual statue of Garibaldi on his feet instead of the more typical statue found in almost every Italy town of Garibaldi astride his horse, and then we return to Borseda.
-Marjorie Eisenach
at July 13, 2017
Email ThisBlogThis!Share to TwitterShare to FacebookShare to Pinterest

In the Village of Borseda

A view of Veppo (5.3 km from Borseda) The town of Veppo In mid-July Borseda is ripe with plums that overhang from trees... 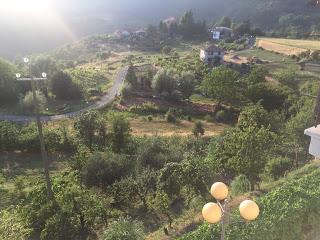 This blog records the goings-on at the Borseda Rensing Center, as seen through the eyes of its artists in residence.